A lot of seedling systems end up being racks and there’s a good reason for it they don’t need that much space. So most of these seedlings are really nice and low when they go in their trays.

Save A Lot Of Space

It’s just a seed stick and maybe a quarter inch up and when they come out depending on the crop. There is not much height, maybe two or three inches at most is the height of the seedling. So we don’t actually have to give them that much room. And especially for using something like LEDs it means we can get that light really nice down close to the tops of those seedlings that means we could save a lot of space by stacking them up. 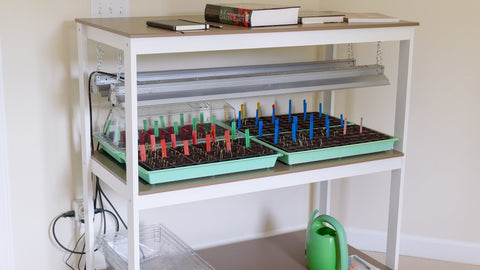 Basically, have a rack something like this problem for a system this size or even bigger and it can supply all of the plant material. Once you have several of these racks side-by-side you’re really able to grow a lot of plant material for a lot of production in a really small amount of space. So, the seedling systems are typically a few different types when it comes to like the irrigation. The pump will come on it will fill this one up, then a siphon pulls all that water successively down to the bottom it drains to our sump tank. We can transplant it but the fact that it kind of all empties and drains down to a sump means, we can just unclip it and roll it around and it stays fairly lightweight.

That’s one nice thing about this the other way to do these seedlings is a misting system. So what you’ll have is like basically a little artificial leaf that will tell the system when to turn on and missed all of the plans to kind of keep them hydrated keep. That humidity really nice and high and that works pretty nice. But we try to avoid that a little bit more simple as you end up with more like leaf disease issues when you have water on the leaves.

It really only needs to flood and drain maybe a couple times a day really no more than two or three times over the course of the day. And that encourages good root growth within the cube, it encourages the plants not to send too many roots out as it will prune everything that kind of comes out the bottom and dries out. And we end up with nice compact plugs that will transplant really nicely when we put them into towers. On this seedling system, we’ve got a lot of different stuff going. We’ve got basically some curable and kales. We got bok choy going and some out-of-control nasturtiums which were growing way faster than anything else. 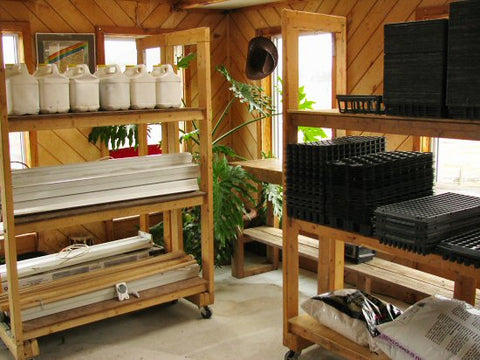 And at this point, we’re just waiting on some electrical to finish up to get all of these into the main system. But as soon as the electrical is done hopefully in a day or two all the stuff will go in and we’ll get this crazy nasturtium out. But this is kind of a typical crop mix for us. As far as you know growing out stuff that’s valuable. And you can see how much we could get. These are like 200 cube trays. We’ve got a lot of plant material really, a lot of plant material several thousand plants and that’s enough for this system.

It Equipped With Lighting

So these systems are equipped almost always with some type of lighting. We’ve got Philips LEDs but we’ll probably be using in our next one more fluorescents and the reason for that is that these plants really don’t need an awful lot of light. They’re little bitty tinder babies when they come into the system. We’re not giving them full strength nutrient solutions we’re giving them kind of much lower concentrations of nutrients. We give them a lot less light. The reason for that is they just don’t handle the stress of going from a little seed that just broke through the seed coat. 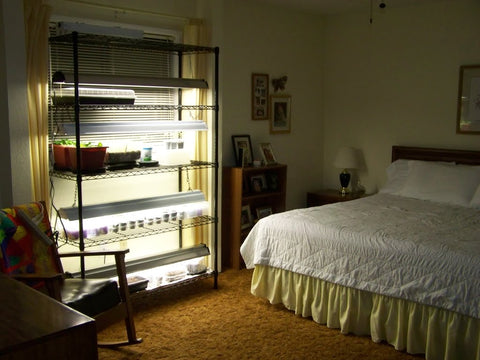 You’ve got this little chute starting up to full light and full nutrient solution. Therefore, we can put them under less light and we can give them less nutrient solutions and they actually like that right off the bat and then over time we can kind of increase the amount of light that we give them. While we’re using LEDs our next one will probably just be regular fluorescents. A lot of these benches are fluorescents. They’re nice too because they give off a little more heat than the LEDs do and you can kind of warm up the seedling environment.

Now the thing to watch out for with fluorescents is that you need to give them enough space that those Celie’s can’t grow into them. Or they’ll burn of course or get too close the nice thing about the LEDs. You can have plants that grow right into the LED. And you’ll end up with a few spots. And there’s dry out a little bit but by and large, your seedlings aren’t going to get burned by LEDs. Therefore, it’s just mostly management and of course, the fluorescents are going to be a lot more cost-effective than trying to put an LED system in for your seedlings.

Newer How Long To Keep Lights On My Seedlings?
Back to list
Older UV Clarifiers For Indoor Growers