One of the simplest Hydroponics systems has been around for thousands of years. It is now called the Kratky Method and it is really easy to set up at home. This is a complete guide to setting up your own Kratky hydroponics system at home.

In the Kratky suspended pot non circulating hydroponic method, tanks are filled nearly to the top with nutrient solution. It is covered with holes in it and is placed over the tank. Individual net pots containing growing medium and seedlings are placed into the holes. The lower 1/2 inch or so of each net pot is immersed in the nutrient solution. 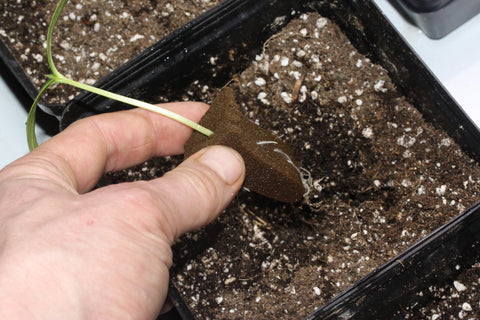 The entire growing medium in the container moistens by capillary action, by automatically providing the plants with water and nutrients. The nutrient solution level in the tank drops below the net pots within a few weeks. But by this time roots have emerged from the net pots. The roots in the solution continue taking up water and nutrients, while roots between the net pot and the surface of the solution give out oxygen and take up air from the humid air layer between the tank cover and the nutrient solution.

In this case, the lettuce crop is harvested before the nutrient solution is exhausted. Then the tank is cleaned and refilled with fresh nutrient solution and the process is repeated. In the case of a short-term crop like lettuce, the entire crop is grown with a single application of water and nutrients.

No effort is needed from transplanting the seedlings until harvest. Longer-term crops may also be grown by a suspended pot non circulating hydroponic method. These include tomatoes and cucumbers. The additional nutrient solution needs to be added via a float valve throughout the crop. A demonstration tank that was used to grow tomatoes. At transplanting time, the nutrient solution level was about 1/2 inch above the screen. The growing medium in the accelerator pots was moistened by capillary action. The crop grows in the nutrient solution level decreases to about 2 inches below the screen. It is maintained at that level throughout the rest of the crop by the float valve pump assembly.

Science Behind The Kratky Method

In 1666 Robert Boyle an Irish scientist proved that rainwater alone will not nourish plants proper juices such as that president dome must be added to the water to nourish plants. In 1699 John Woodward an English scientist found that the greatest growth occurred in water which contained the largest amount of garden soil. From 1851 to 1853, the French Chemist, Jean Boussingault established that plants could grow in an inert medium such as silica sand which was moistened with a solution containing chemicals or nutrients. Around 1860 both Sacks and Knop eliminated the need for sand as a support for plants and were able to grow plants in the only nutrient solution that is water and chemicals.

In the late 1920s in the 1930s professor Garicke at the University of California experimented with commercial sized applications of this new agricultural science which was becoming known as water culture, soilless gardening, soilless culture, nutrient culture, and hydroponics.

The moist air space in the tank plus the air in the seedbed provided adequate aeration and there was no mechanical aeration. Gericke’s method provided excellent growing conditions for various crops. For example, 16 pounds per plant of tomatoes were produced.

Arnon and Hoagland at the University of California also applied forced aeration into the nutrient solution of the Gericke’s method hydroponic tanks. Aeration improved the growth of the plants and the yields were 21.1 pounds per plant in the AIRAID solution treatment versus only fifteen point seven pounds per plant in the non-aerated solution. Thus aeration increased the yields by 34 percent. 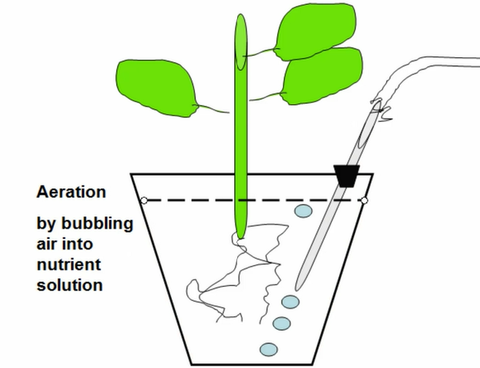 Thereafter it was assumed that the nutrient solution needed to be the aerated system.

In 1985 Dr. Imai who was a scientist on assignment to AVR DC from Japan. Dr. Imai showed some soybean plants growing without aeration. That hydroponic plants needed to be aerated. 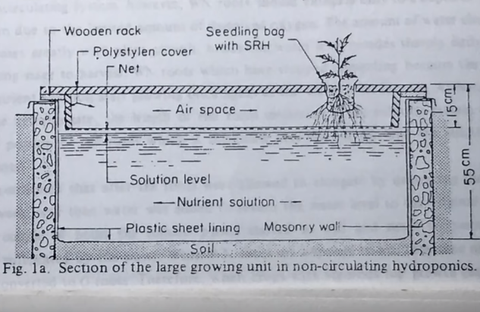 In Dr. Imai method, a seedling bag was made of netting and filled with smoked rice husks. And this was supported by a polystyrene tank cover. There was also a layer of netting 15 centimeters below the tank cover. Initially, the seedling bag was immersed about one centimeter in the nutrient solution. The nutrient solution level decreased as the plant grew.

And an increasing air space developed. Roots growing in the airspace were called all roots or oxygen roots their main function was aeration and the roots that grew in the nutrient solution were called W N or water and nutrient roots and their function was to gather water and nutrients. The oxygen roots are more fluffy and branched than the W n roots. When the w n roots are exposed to air they take only two to four days to be converted to all roots. However, if all roots are immersed in water they become non-functional and the plants’ wilt and possibly may die.

Therefore one shouldn’t add more than one or two centimeters of water at a time to these tanks nor should they be exposed to heavy rainfall.

Dr. Imai also discusses a home production system where the tank is a plastic container. It looks and functions very much like systems. It became apparent that Hawaii has many areas where the climate is suited for vegetable production, but the soil is too rocky or infested with disease organisms or nematodes and electricity are either too expensive or not available in many possible production areas. Some adaptation of Dr. Imai non circulating hydroponic system would be ideal for Hawaii. 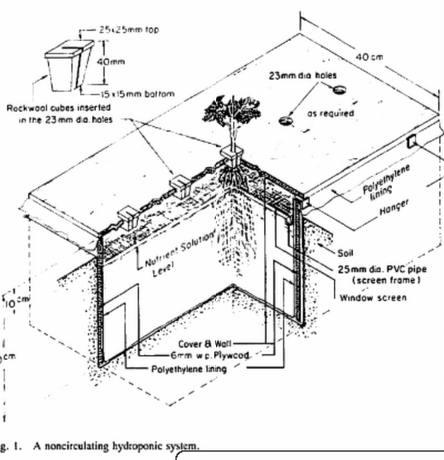 Nutrient solution was added once or twice a week to keep it at that level but we never added more than 2 centimeters of nutrient solution at a time. During a 62 day harvest period from December to February yields from the hydroponic tank or 3.5 kilograms per plant versus 3.1 kilograms per plant from soil-grown tomatoes. Therefore this non-circulating hydroponic system was competitive with soil bed production.

Grew lettuce in plastic forestry tubes where the bottom 25 millimeters was immersed in the nutrient solution. The initial solution level of 75 millimeters dropped down to about 30 millimeters at harvest time. The hydroponic lettuce yielded about 250 grams per head versus only 201 gram per head for soil-grown lettuce.

The two hydroponic patents have now expired and the technology in the pants may be used freely for any legal purpose. There was held the first non circulating hydroponic workshop in Hilo and dr. Imai was a special invited guest speaker. The workshop was very successful but never held a second workshop.

A paper entitled three non-circulating hydroponic methods for growing lettuce was presented at the international symposium for soilless culture and hydroponics in Lima Peru. A suspended net pot non circulating hydroponic method for commercial production of leafy romaine and semi-head lettuce is a flagship article and was published by the University of Hawaii College of tropical agriculture and human resources.

About five years ago MHP Gardner demonstrated this hydroponic method in a YouTube video.

MHPGARDNER read one or more publications and built a hydroponic tank setup as described in the publication. He wanted to give credit to me as the author of the publication and thus referred to this as Kratky method.

MHPGARDNER produced at least five excellent YouTube videos where he described this hydroponic method as the Kratky method. In total there have been over two million views of these youtube. This method really should have been called the Sachs method or the Gericke method or certainly the Imai method.

But with over two million views this suspended pot, the non-circulating hydroponic method has become known as MHPGARDNER has proclaimed it – ‘The Kratky Method’.

Tags:
aquaponic, hydroponic, organic farming
Newer 12 Ways To Reduce Indoor Pollution And Get Clean Air In The Home
Back to list
Older How Far Should My Lights Be From My Seedlings

END_OF_DOCUMENT_TOKEN_TO_BE_REPLACED

Cordyline: to plant in your garden Pretty persistent shrub plant, the cordyline reveals a pace of pa...