How Far Should My Lights Be From My Seedlings

The lights you’re using in hydroponics systems. That’s usable light between 120 and 150 micromoles per square meter per second.

We’re not just measuring directly under this light if we just measured right all the time. We need side by side in order to cover all of our seedlings. You basically want to actually set the lights up and look for nice even coverage. If you have a par meter that’s great but most of you don’t. So you’re just going to have to eyeball it. We can get away with a little bit less for the same amount of wattage. 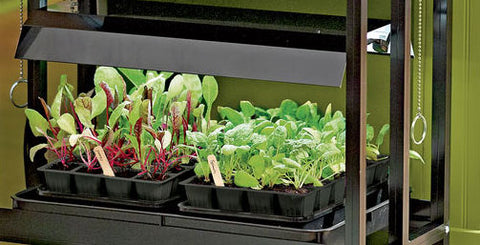 We can spread these out about twice that length. So every eight to ten inches on the LEDs and still get pretty decent seedling production. Therefore, the intensity is really important with seedlings. Seedlings will usually grow if there’s enough CO2. If there’s enough of these other environmental variables present they’ll usually grow about as fast as you give them light.

So if you give them a little more light they’ll grow a little faster. If you give them a little less light they’ll grow a little slower. And also important is day length, you want to be delivering around 120 to 150 micromoles per square meter per second of light to your seedlings. If you’re doing that they’re going to grow great for you. And you’re really going to get great ceiling production.

Newer History Of The Suspended Pot, Non Circulating ‘Kratky’ Hydroponic Method
Back to list
Older How Long To Keep Lights On My Seedlings?